GEM Benefits will maximize the productivity and profitability of your business by using a managed approach to benefits and pensions.

We take a managed approach to
group benefits plans. 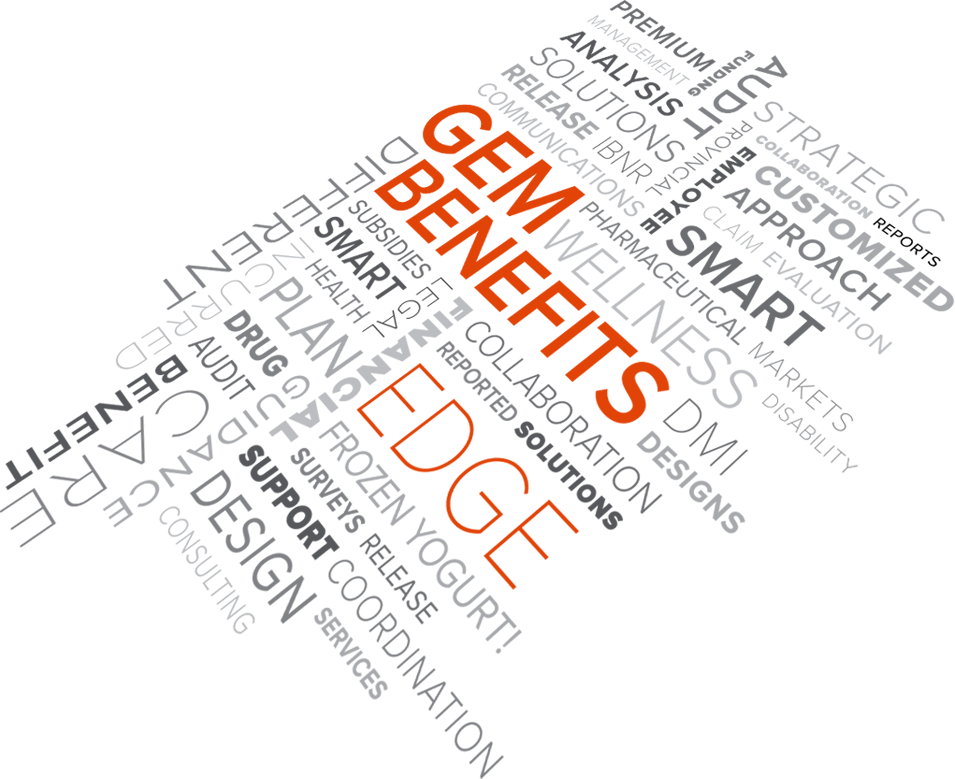 The traditional role of a group benefits carrier is claims adjudication, however we take an active approach to minimize the risk associated with rising costs, runaway claims, tax inefficiency, and hidden liabilities.

Best Doctors® has changed initial patient diagnosis 22% of the time, modified treatment in 61% of cases, and has saved 67% of patients from invasive surgical procedures.

You and your benefit plan can save significantly by choosing generic drugs, as they cost anywhere from 10% to 80% less than the brand-name drug.

The World Health Organization estimates 50% of people do not take their prescription drugs as directed by their physicians.

Wellness programs save about 1.5 to 1.7 days in absenteeism per worker over 12 months, which means a reduction in absenteeism of 14-36 per cent, and a savings of an estimated $251 per employee per year.

Overall levels of stress, emotional exhaustion, and employee burnout are rising, creating a modern day pandemic in organizations that come at a great cost to employers. In Canada alone, costs due to stress are estimated to be upwards of $50 billion (Lim et al., 2008).

According to the World Health Organization, chronic disease can be prevented in many cases. If related risk factors were eliminated, at least 80% of all heart disease, stroke and type 2 diabetes would be prevented; over 40% of cancer would be prevented.

Health benefits also continue to be an effective means to attract and retain employees, as 77% of respondents say they would not move to a job that did not include health benefits (increasing to 85% in Atlantic Canada and decreasing to 66% in Quebec).

In the 2015 edition of The Sanofi Canada Healthcare Survey, a clear majority of plan members (85%) state having one or more health or fitness goals—and 21% feel the workplace is a barrier to reaching those goals.

It is striking that our results show that 84% of Canadians say that employers are responsible for supporting their employees’ physical health and that 86% feel the same way when asked about psychological health.

These are a few examples of why our managed approach to group benefit plans can help keep costs in check while enhancing the welfare and morale of your employees.

Together we can create a plan that is suitable and sustainable for your organization.

Looking after your employees physical, mental, financial and professional well-being is the new gold standard – and your coverage should be as unique as the people that grow your business.

An advocate in your corner

Our primary focus is to help you invest in your greatest assets.

While the traditional role of a group benefits carrier is geared towards claims adjudication, we take an active approach towards minimizing the risks associated with rising costs, runaway claims, tax inefficiencies, and hidden liabilities – helping you making smarter decisions.

We make sure your bases are covered in the short term while taking care of your team for the long-run.

Experts you can trust

With over 50 years of experience, our brokers know that you should never have to navigate regulatory changes and the evolving needs of the modern workforce alone.

With total end-to-end transparency, you will have confidence knowing your bespoke retirement and group plan will align with your company values and your employees’ ideals.

Let’s create a plan for your future, while giving you peace of mind today

The benefits landscape has shifted dramatically over the past few decades. The modern worker is looking now more than ever for their employer to make the investment that will enable them to be happy, healthy and high-performing in their roles.

Working with the best and brightest in the industry allows us to take a personalized approach, so your workers feel secure with a world-class and reliable plan looking out for them.

In partnership with the Winch Group in Burlington Ontario.

In affiliation with The Benefits Alliance Group.